This time last week Gardner Leader’s reception area in the Newbury office was quite literally covered in cake!

Following on from the success of our bake off for Comic Relief last year, this year we decided to get involved for Children in Need & Parkinson’s. Once again, we were completely overwhelmed by the baking enthusiasm and talent of our colleagues. The cakes were on sale in Newbury and Maidenhead with each team competing to sell the most cake. We are absolutely delighted that we were able to raise £1,000 on the day for the charities.

As well as selling the cakes, each team had to select their best two cakes to represent them in the bake off semi-finals. An internal panel of GL employees/partners (whose identities have been protected!) then selected the final cake from each team to be put before our bake off judge, chef John Campbell from the Woodspeen restaurant and Saturday Kitchen.

We are very grateful to John for giving up his time to judge our efforts on the day and for giving so many hints and lots of praise. We are slightly less grateful that Alastair Goggins, Partner and Head of Litigation, and overly competitive closet baking enthusiast, was presented with the trophy for the best cake! However, we recognise that his efforts were very impressive and he also won the brilliant prize offered by John Campbell to have lunch in his restaurant and spend an hour with him in the kitchen! Special mention should also go to runners up Wendy Robinson from Conveyancing and Becky Reilly from Commercial.

Finally, we should say very well done to Lucy’s Private Client team who, slightly controversially, came away with the team trophy for selling the most cake.

We would like to send our thanks again to John Campbell and to all at GL for such amazing baking! 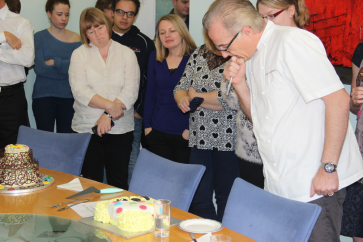