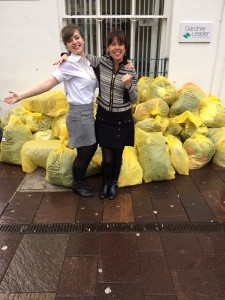 Welcome to our Spring edition of our Charity Newsletter

In this edition, our Tara McInnes, Sam Pinder and Diane Yarrow all offer some perceptive comments on a number of topical issues within the Third Sector. Tara prompts some thoughts on the Illott v. Mitson case which is now destined for the Supreme Court, Sam guides us through the changes now affecting charities reserve funds and Diane, who joined Gardner Leader in January, offers us all her analysis on ‘brand protection’

Whilst most of us were doing our best to just stay warm this winter, Evelyn Williams from Lambourn completed the Talisker Whysky Atlantic Challenge by rowing solo across the Atlantic. It took him 66 days 13 hours and 55 minutes! We were extremely proud to sponsor him and very appreciative of all the money he managed to raise for good causes. Well done Evelyn! In far more modest terms, our three offices collected 65 bags of clothing in aid of Naomi House last month.

Gardner Leader staff are now in the process of nominating its next ‘Charity of the Year’ (this year’s charity is Naomi House and Jacksplace). The CSR group will collect all nominations and prepare a shortlist to be submitted to the whole firm for a firm-wide vote in June. If any charity is interested in being nominated then please contact us.

I hope you all find the issues covered in our Newsletter interesting and informative. Thank you for taking the time to read it, if we have prompted some questions then please do not hesitate to give myself or another member of the team a call on 01635 50808.

March 2016 saw yet another interesting turn in the widely reported Ilott v Mitson case, when the Supreme Court granted the beneficiary charities under the, now infamous, will of Melita Jackson (namely The Blue Cross, RSPB and RSPCA) permission to appeal against the 2015 decision of the Court of Appeal.

Under Mrs Jackson’s will, the charities each received a third share of her £486,000 estate. Heather Ilott (Mrs Jackson’s only child), who had been estranged from her mother for more than 20 years, brought a claim under The Inheritance (Provision for Family and Dependants) Act 1975 (IPFDA) for reasonable financial provision.  Ms Ilott was successful in her claim and was initially awarded £50,000.

On appeal, the Court, found the judge’s decision in the High Court was wrong, as he had failed to consider the effect that any award would have had on Ms Ilott’s State benefits. The Court of Appeal therefore increased the award to £164,000, which equates to approximately one third of the estate. Lady Justice Arden’s view was that whilst Ms Ilott never had an expectation of receiving anything from her late mother’s estate, neither had the charities and anything they did receive amounted to a windfall.  The award was structured in such a way so as to not reduce the amount of her state benefits.

The Court of Appeal’s decision is controversial, it was considered by some as a further attack on testamentary freedom and a person’s right to leave one’s estate to whomsoever they choose. In the charity world there was concern that the court was seen to be favouring disinherited family members over charitable causes, which was clearly the impression that the judge gave in her judgment. There was also concern that the finding would open the floodgates for further IPFDA Claims from disgruntled adult beneficiaries.

It was hotly debated at the time, as to whether the charities would appeal the Court of Appeal decision. Recent online and media attention has shown the charities being criticised for continuing with the claim and using much needed funds to do so.  So why have the charities appealed and are they wrong to do so?  In my view, the charities were given little choice, the Court of Appeal award was contentious and some of the comments made in the judgment were very damaging to charities.  There was the impression that charities didn’t need the legacy that they were left and it was merely a windfall.  Following the decision, I have noticed an increase in the amount of claims being brought by disgruntled adult beneficiaries, hoping to rely on the Ilott decision.  I have also noticed solicitors using the decision as support of weak and ill brought adult IPFDA claims.

Whilst the original award to Ms Ilott amounted to only 10% of the value of the estate the increased award amounts to one third of the estate, which is a huge increase. As a result of the way in which the award was structured, Ms Ilott can continue to claim state benefits and use the award to purchase her property.  Whilst, the charities, lose a third of the value of their inheritance.  It all seems a little unfair, especially when considering that her late mother’s wish was to leave her nothing at all.  The impact the Supreme Court’s decision will have on IPFDA claims and basic testamentary rights, is huge.  Therefore, I await the outcome with trepidation and hope that that the Supreme Court will make a sensible and well-reasoned decision in order to bring an end to this long overdue matter.

Never has it been more challenging (or, perhaps, exciting) for a charity to engage with its target audience. The range of options has never been greater and grows with each new social media platform! Charities looking to connect with potential donors have to analyse their target market (both the public and stakeholders) and think about how those individuals and organisations will respond and engage most effectively.

So once a charity has worked out what are the best routes to its target market, they need to consider their approach from a legal perspective. There are many legal aspects associated with online engagement, some of which may not be instantly apparent.

Whether a charity is connecting in person, online or in printed material, it is all a representation of the values, aims and objectives of the charity. With this in mind, a key focus remains on “brand protection”.  When interacting online, charities should keep that key principle in mind, as any action that might have a negative impact on the brand is something they should avoid.  Examples include not using third party IPR (photos, music, art etc.) without consent and not sharing confidential information about individuals or businesses without consent.

It is also true that news and stories spread faster than ever, with everyone online feeling empowered and being encouraged to share and to add their own comments and thoughts on any subject. Any charity that posts information must be prepared for the loss of control that comes with the use of online forums.  As well as relishing in the good news stories that this will inevitably bring, there should be a plan in place to manage the risks associated with it.  A charity should think about how it will deal quickly, effectively and publicly (if appropriate) with any interactions that the charity is not happy with.

Everyone who is permitted to use the charity’s online accounts needs to be trained so that they know how the brand is to be represented online. The online policy should be clearly contained within a handbook for staff and volunteers.  This will then ensure consistency and train users in how to minimise risk through their digital behaviour.

There is a whole world of opportunity out there, but it is worth a conversation about the basics at an early stage, to make sure that the risks are managed effectively.

With the high-profile demise of ‘Kids Company’, the issue of how trustees govern charities has been brought into sharp focus. In light of this, the Charity Commission has issued updated guidance for trustees seeking to comply with their responsibilities in terms of financial management, in particular the need for a financial reserves policy.

In terms of Kids Company, a report published by House of Commons Public Administration and Constitutional Affairs Committee (PACAC) at the beginning of February lay the blame firmly at the feet of the charity’s trustees.

Such high profile, fundamental failings provide a valuable lesson for all involved in the management of charities. The trustees had failed to heed consistent warnings from auditors regarding the charity’s precarious financial position, which was incapable of surviving any variance in its funding stream.

In PACAC’s report, Kids Company’s ‘demand-led’ model, where children could self-refer to the charity and be protected by the idea that no child should be turned away, raised the need for bespoke consideration as to what constitutes sufficient reserve levels.

In light of the Charity’s size, the report suggests that six months spending (approximately £12 million) would have been appropriate. In 2013, the £424,282 held in reserve constituted approximately 6% of the recommended amount.

The vulnerability of a charity the size of Kids Company, whose income was £23.1 million in their last financial figures, highlights the need for more specific financial advice for the trustees who manage charities on a much smaller scale. For instance, the Charity Commission’s December 2015 figures state that nearly three-quarters of charities have an annual income of less than £100,000.

It is somewhat convenient that the Charity Commission updated their guidelines on these matters at the end of January, three days prior to PACAC’s report. In Charity reserves: building resilience (CC19), it was confirmed that there is no ‘one size fits all’ approach. In fact there is ‘no single level or even a range of reserves that is right for all charities’.  The guidance advises trustees to continuously review both their reserves policy and the level of reserves.

Of particular assistance are the annexes in CC19 which detail a step-by-step approach to developing a reserves policy both in terms of simple charitable organisations and those which are more complex. Underlying a competent policy are provisions that fully justify the extent of financial reserves, ensuring that the essential requirements of beneficiaries are protected and plans are put in place for unforeseen liabilities and financial difficulties.

There are approximately 580,000 trustees of charitable organisations in the UK and this advice provides some welcome clarity, certainly considering that it is thought that the vast majority of trustees are volunteers, with little management experience.

Yet significantly, the need for financial reserves is still up for debate. CC19 recognises the importance of having a policy, if not necessarily the financial reserves itself. This is a question left to the trustees of each charity, operating in a challenging environment and balancing the need to ensure that as many funds as possible are distributed to beneficiaries whilst ensuring that those same individuals still benefit where there are darker days in the future.